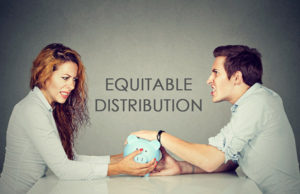 We all know divorce implies a division of the couple’s assets. However, this distribution will operate differently depending on whether or not the couple has a prenuptial or  post nuptial contract governing the distribution. In the absence a contract, Court will apply the legal rules by default to determine the distribution.

Most of the countries in the world have adopted the community regime. This means that all property acquired by each of the spouses will remain his or her personal property. On the other hand, assets acquired after the marriage is considered common and will be distributed to both spouses after consideration of its value and each spouse’s contribution to its acquisition for some assets. This is true of most European countries, and some states like California.

How are common assets and separate assets acquired during the marriage distinguished? What about assets acquired by inheritance? Income? Joint bank accounts receiving income from both parties? Retirement plans?

These are a few of the many questions that need to be answered before initiating a divorce procedure. The help of a specialized and experienced lawyer will allow you to fully understand the material and financial consequences of your divorce. Your attorney will also be best able to defend your interests in the event of a dispute over the nature of an asset.